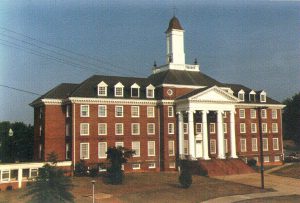 With the opening of the Central Virginia Training Center in 1910 (known then as the Virginia State Colony for Epileptics), the state of Virginia has operated five medical live-in facilities for people with intellectual or developmental disabilities. In 1999, the Supreme Court ruled that segregating people with disabilities from the community was in violation of the Americans with Disabilities Act because, “institutional placement of persons who can handle and benefit from community settings perpetuates unwarranted assumptions that persons so isolated are incapable or unworthy of participating in community life.” As a result of this ruling, the United States Department of Justice (DOJ) filed a complaint in 2011 against Virginia for continuing this segregation, stating, “The inadequacies we identified have resulted in the needless and prolonged institutionalization of, and other harms to, individuals with disabilities in [the Central Virginia Training Center] and in other segregated training centers throughout the Commonwealth who could be served in the community.” Because of the DOJ complaint, and citing the unreasonable cost of funding both an expanded Medicaid program and the live-in facilities, the state of Virginia decided to close four of the five Training Centers and move residents into group homes or equivalent community housing. People with disabilities who live on their own, with their families, or in smaller group homes are eligible to receive Medicaid vouchers funded by the state to cover medical care. Although relocating Training Center residents to alternative housing is a positive outcome in many cases, there are also residents who have lived in a facility for most of their lives, or who have disabilities severe enough to need 24/7 care that cannot be easily provided in a group home setting. Some of these residents and their families feel disenfranchised by the state because they were not consulted about what they wanted or needed before the decision to close the Centers was made. Closing the Centers seems to be considered a “win” for disability rights from an outside perspective; however, some insiders worry this action has only further spoken over the voices of the disabled. Many feel that community support should be provided to those who wish to leave the Centers, while residents and caregivers who want to stay have the option to do so.

Funded by the Institute for Society, Culture, and Environment, our interdisciplinary team of researchers conducted a study by interviewing residents and family members about their displacement experiences. By conducting interviews with the families and caregivers of the residents being displaced, we present a perspective on this issue that has been largely overlooked. Using an interdisciplinary approach from rhetorical and policy analysis, human development, social science, and disability studies, our analyses of these interviews highlight the experience of displacement, bringing the relevant issues into the public consciousness and challenging predominant views by policy and lawmakers that the current policy is the best for all residents. In doing so, we have the opportunity to provide  a platform for those who are otherwise unheard. Furthermore, we hope to potentially inform better policy on these issues by providing data on how displacement affects those with disabilities.